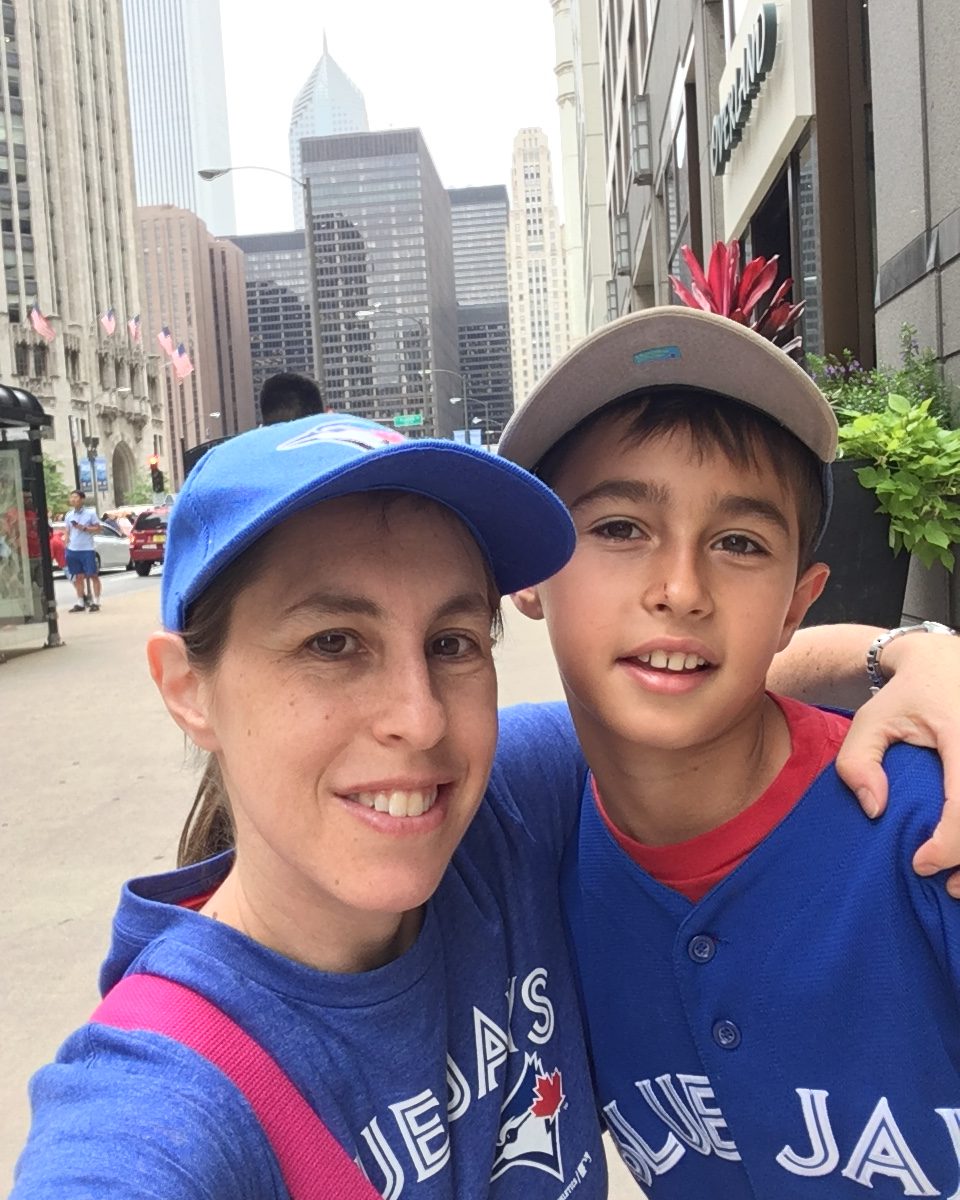 My son Matthew loves sports. He is crazy for baseball and is a huge fan of the Toronto Blue Jays. He also likes the Chicago Cubs and followed their thrilling playoff run in 2016 when they won the World Series. After the big World Series win Matthew told me that his dream (note he was 9 years old!) was to see the Cubs play at Wrigley Field in Chicago. He joked that it would be just so cool to see the Blue Jays face the Cubs at Wrigley.

Then the 2017 Major League Baseball schedule came out and lo and behold, his beloved Blue Jays were scheduled to play the Cubs, at Wrigley, in Chicago. He had to go. I had to go with him. We booked our flight, our hotel, then secured a pair of tickets to the August 18 game.  Matthew’s dream was about to come true.

Fast forward to Friday, August 18, 2017 – today. I already sent David off to the family’s country home in St. Donat with our daughters (more on that in a blog post next week). Matthew and I woke up at 4:30 am to a dark and quiet house and crawled into our awaiting Uber taxi. With only carry-on luggage and Nexus cards in hand, we were at our gate 10 minutes after our arrival at the airport.

Our very full flight was on time and felt like a party. Most of the passengers were just like us, headed to Chicago to cheer on the Jays. There was laughter and chatter and even the flight attendant yelled “Go Jays Go” over the loudspeaker. It was the most festive atmosphere I have ever experienced on a plane.

We landed early this morning in Chicago, at 7:25 am, and made our way to our hotel downtown. We dropped off our luggage, enjoyed a filling breakfast at a local café then set out to explore the Magnificent Mile and surrounding area.

Matthew fell in love with Chicago immediately. The tall buildings, the friendly people and great shopping (for him that meant sports stuff and candy).  He secured a Cubs hat and even a t-shirt with Kris Bryant on it – only because he is #17 and that’s what matters, of course.  Then we made our way to Wrigley.

On the packed train to Wrigley Ville Matthew was jittery and excited. He looked at me at one point and remarked with a big smile, “I have never been so excited in my life.” As the train approached Addison station and Wrigley field appeared through the window, he was in awe. He was so excited that he could not even speak.

The stadium and the game proved to be everything we had hoped. There is something magical about this ballpark, the Cubs and Cubs fans. The thousands of Jays fans in the stands were as loud as the Cubs fans, and we had so much fun sitting with locals and tourists alike. I have been to a few MLB ballparks, but never have I sat with more friendly and wonderful people than the Cubs and Jays fans we sat with today. They are what made the game so great. We cheered together for both teams, clapping loudly when Pillar made an incredible catch at the centre field wall or when Javier Baez blasted a massive home run late in the game.

Matthew tested out his new Cubs hat and shirt and mixed these with his Blue Jay paraphernalia. He high-fived the pair of Jays fans in the row ahead of us. He shared stats and stories about all the Jays players with everyone around us. I learned the life story of the guy in the row behind us who is retired and now has season tickets to the Cubs. We were like one big happy family.

The Jays lost the game, and they were clearly outplayed. But it didn’t matter. We had a wonderful time at Wrigley. We stayed a while after the game to explore the neighbourhood and celebrate the afternoon with thousands of other fans. Matthew even cheered on the Blue Jays players and coaches as they boarded their bus.

Tonight, we are exhausted but exhilarated. We feasted on some of Chicago’s famous deep-dish pizza for dinner, and we are ready to collapse. Tomorrow is another day in the Windy City. We start our day on the river for an architectural tour of Chicago on the First Lady and will finish off at a Major League Soccer (MLS) game, as the Toronto FC take on the Chicago Fire.

It’s sports and Chicago with my boy. What could be better?