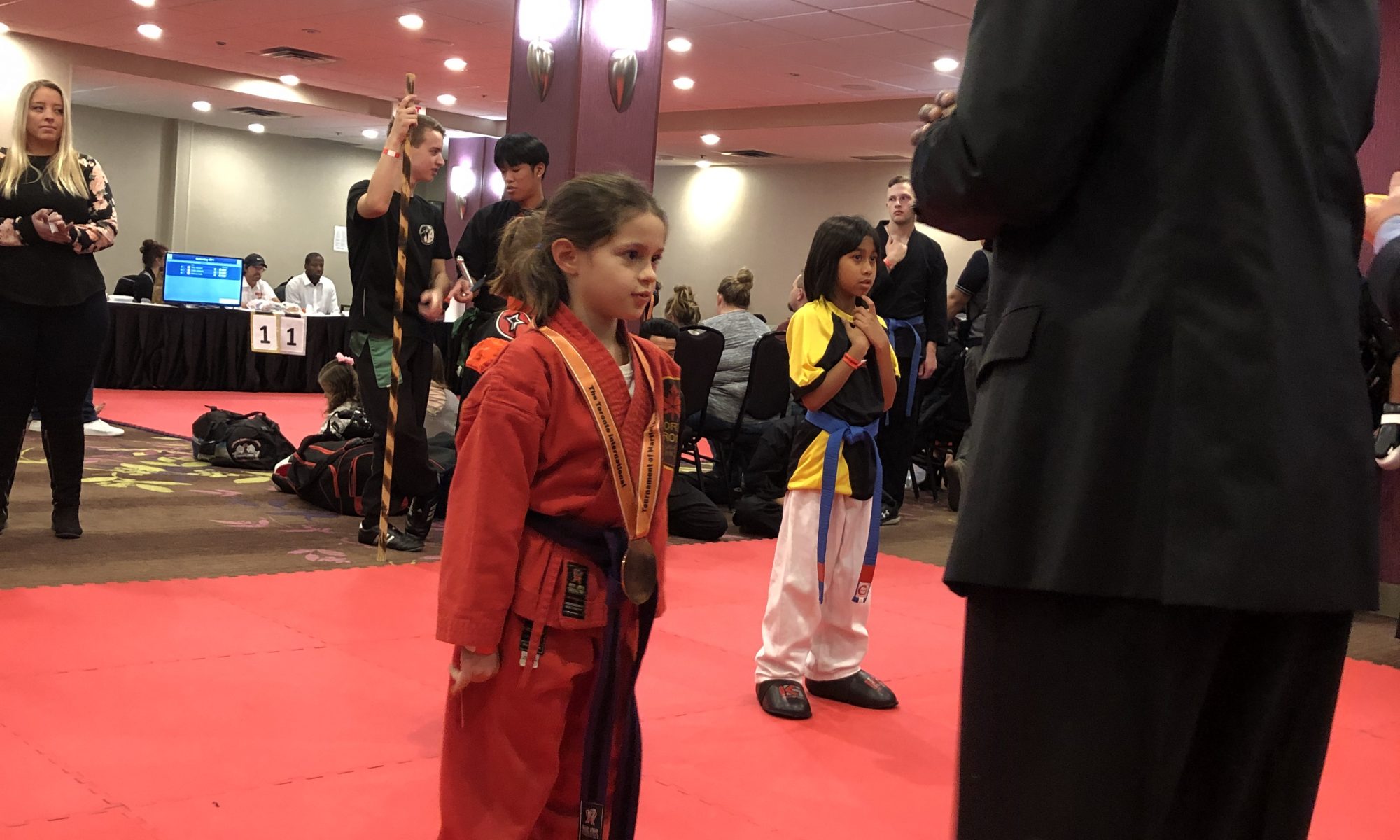 I would consider myself to be a decent mother. I indulge my children when they need indulging, push them when they need pushing and discipline them when they clearly need disciplining. My kids are intelligent and feisty, and all three of them have unique traits that make them loveable in their own way. When any one of them is eager to try something new I am happy to encourage them. This was the case when my middle child, Julia, decided she wanted to participate in a karate tournament.

I am proud of Julia’s drive to pursue karate. Like her brother, we enrolled Julia in karate lessons at age 4 as we felt that learning some self defense skills and confidence in herself would be invaluable. She took to the sport well and has excelled. At age 8 and many inches under four feet tall, Julia has achieved an advanced purple belt.

If you look at her face when she is practicing a kata or puts her fists up ready to spar, you wouldn’t want to meet her in a dark alley! My daughter knows what she’s doing!

While Matthew, with a black belt in karate and tremendous strength and poise, shies away from competition, Julia loves it. Matthew would prefer to focus on learning and teaching younger kids. Julia can feel the adrenaline of stepping outside her comfort zone and trying something new, like a tournament.

I am much more like Matthew and typically shy away from anything competitive. It’s not that I am scared to lose, I just don’t like the feeling in the air at competitive events. I will admit that they make me uncomfortable. As the saying goes, “those who can’t…. write.” I never played sports well, so that’s why I became a sports journalist!

But I digress. A couple of months ago Julia announced that she wanted to try a karate tournament. The school where she takes lessons hosts and participates in various tournaments throughout the year, and her sensei encouraged her to train and try one. Sure, I thought, why not.

Wow, I really knew nothing. Julia has been training and getting extra support after her regular karate class, to boost her confidence in her katas and sparring. She decided that she would only participate in one session – sparring – for her first tournament as she wanted to ease into this new world.

I signed her up for her first tournament which we knew would take place in the west-end of Toronto on December 1st. And that’s all I knew. You see, while I am not organized in every aspect of my life, I am a bit of a planner. When I travel, I organize the car rental, hotels and schedule. If I plan a family outing, I take care of the logistics. When I rely on someone else to plan, I get heart palpatations and anxiety.  Walking into anything unknown really bothers me.

That was the case at the karate tournament. I had a date, an address and a time. That’s it. I kept thinking to myself, I’m sure this event would be organized and well-run. It’s karate after all, a sport based on discipline. Boy was I wrong.

We arrived to a place that could best be described as slightly organized chaos. The line-up to register was long and messy. The check-in person kept repeating to me to check the email that was sent to me about Julia’s division. No email was sent to me. She was in division 13, the person told me. That means what, I said? Where does she compete? When does compete? How many other children will be in her competition? No answers.

We finally tracked down one of the tournament organizers from our karate school who kindly walked us over to a room on a lower level where children of all ages were getting ready. More chaos. Most of them were warming up like soldiers before a battle but they were four-feet tall and had no shoes or socks on. One kid was running around with what looked like a plastic sword screaming some version of Japanese gibberish, I think.

While Julia’s assigned zone was clearly a competitive area for children, I felt no warmth from the other parents. For the most part, it was kids aged 6-12 participating, and wow, those parents took it seriously. Some were hollering at their children to warm up, others were drilling their kids on the right moves. Others sat there on their phones and held seats for people who never showed up. Not a friendly face around me. I had clearly stepped out of my usual comfortable space and into another realm.

The one smiling face came from the mother of Julia’s friend, who has been taking her 7-year-old daughter to tournaments for the last year. She saw the stress on my face and tears in my daughter’s eyes as we both stood there overwhelmed and terrified. And her sweet, chatty daughter (like mine) put the cheer back into Julia’s face. Thank goodness for that.

We waited and kept hoping Julia’s turn would come soon. Patience is not one of my daughter’s virtues, especially when she was feeling anxious about her first tournament. Competition like this is new to her, she had limited training and she is tiny! I looked around and noticed that, as usual, the children in her age and category were a bit older, had more training and were much bigger. Julia has worked hard and is a very confident little girl, but this was a bit much, even for her (and me!).

Julia sparred against a girl who was definitely older, had a brown belt and was over a head taller. She didn’t have a chance. But, like the shining light that she always is, Julia rose to the occasion and tried her best. She got a few kicks in and threw a fair number of punches. Julia lost her match but she won the day. She walked away with a shiny bronze medal (yes there were only 3 kids in her group but so what) and her head held high. She even said she wants to compete again, and this time with a kata. And her father will take her to the next one.

Competition and tournaments are not for the faint of heart. They are chaotic, rough and people can be downright mean. I think the most aggressive people in the room were the parents of the 7-year-olds. How can anyone push a child that way? That is not for me. Or for my daughter. If you want to win, great, go for it. But can’t an 8-year-old have fun too? I still have in my mind the crushed look on the faces of some of those kids who scored too low to get a medal. And the look on the parents’ faces weren’t any better. My message: get over it. Relax. Have fun. The junior division of a karate tournament is not worth getting so stressed out.

So I survived and so did Julia. And yes, she even get her own souvenir medal.. Maybe she will try it again. Maybe she won’t. But no matter what she chooses, I will always be proud, as I am a decent mother.