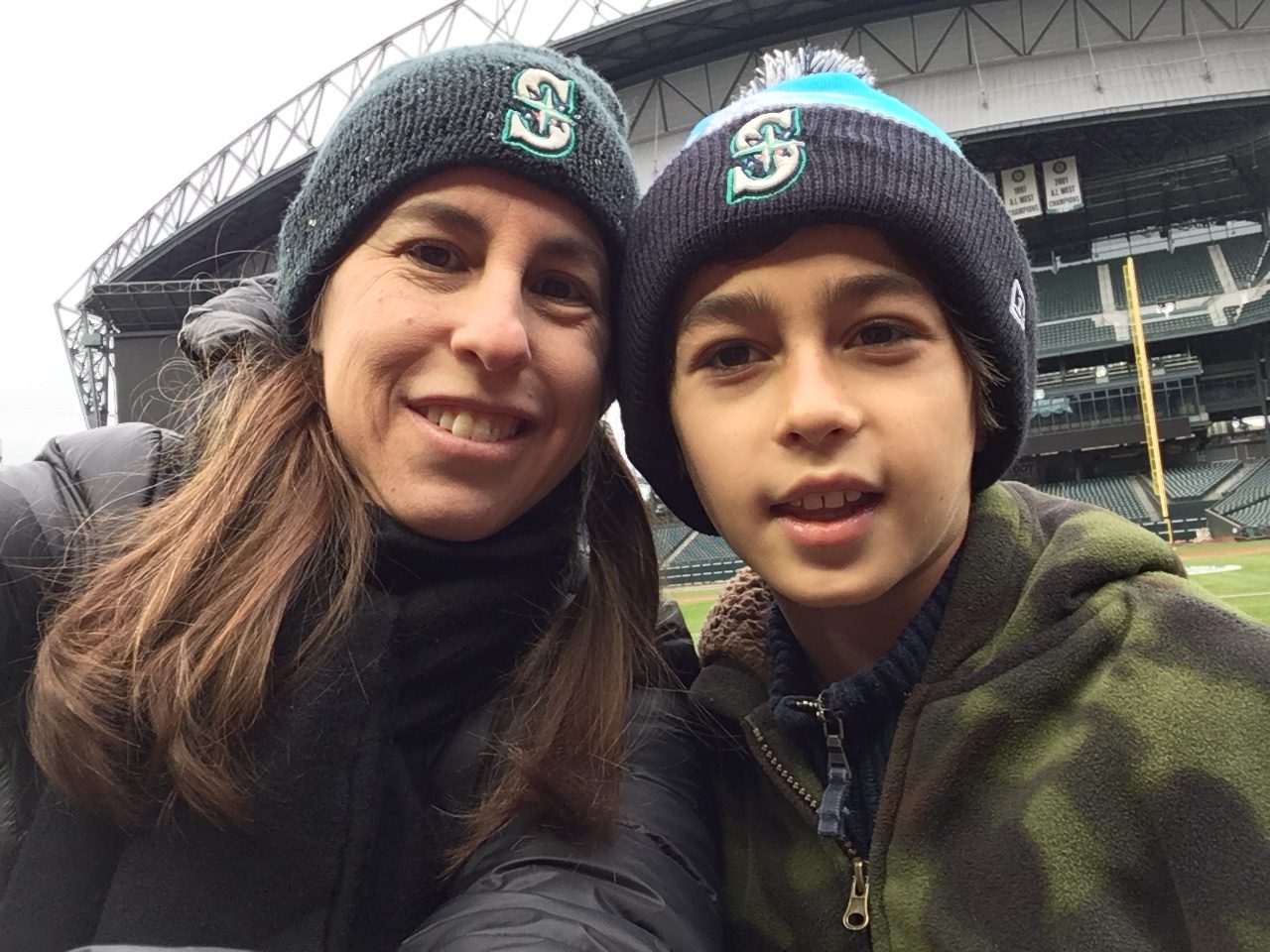 My son Matthew loves baseball. I would consider myself to be a baseball fan, but Matthew has taken it to a new level. He doesn’t just love the Toronto Blue Jays, he loves baseball in general. He talks about the sport all the time, air pitches all over our house and watches live games or highlights every chance he gets. His dream is to visit every Major League ballpark, all 30 of them, during his childhood. This week he checked one off his list with a tour of Safeco Field, the home of the Seattle Mariners.

Have you ever visited a Major League Baseball park during the off season? It’s a very different experience. First of all, it’s really clean. And it’s quiet. So quiet that it’s almost eerie. It almost feels like you are a celebrity or you are in a movie where you are that main character who appears on screen in the empty ballpark. And it’s really cool!

Our guide greeted us in the Safeco Field Mariners’ store (of course, that way we could make souvenir purchases, like our new hats, before the tour even began!). He was dressed head to toe in team gear and knew everything about the local baseball club and the building in which they played.

As we traveled through the various levels of the stadium, from the concourse on the 100 level to the cheap seats on the 300 level, our guide shared with us his tremendous knowledge of everything Safeco Field. It’s fan friendly and its roof really is a “retractable umbrella.” The incredible rolling mechanism, which is actually in three parts, is quite the engineering feat and I believe weighs, in total, over 20 million pounds. But it’s not a roof, as it’s above the lights and allows fresh air to flow through the stadium. Amazing.

Once we had a taste of the stands, our guide took us indoors to the restricted zones of the building. First we visited the private suites, then we headed up to the press box. It’s a place I knew well from my early days in sports media. Well, I spent time in the press box at the Rogers Centre, so it was my first time in the press box at Safeco Field. Wow, it’s a big one, with a perfect line ahead to home plate and the pitcher’s mound. The protective netting behind plate at this ballpark is also quite low, so a journalist who is not paying attention could get a line drive in the head if he or she is not careful. Oh the walls could talk there!

We then traveled down to the bowels of Safeco Field, to the most restricted part of the stadium. We saw the exclusive Diamond Club for people (or corporations) who pay big bucks for the fancy seats first then headed down the hall to the visitor’s clubhouse. Matthew loved this part of the tour.

Since it’s the off season the locker room of course was not in use. So the Mariners’ tour team had the space set up with its team jerseys to give us an idea of what the locker room would look like if some uniforms were set up. The 5,000 square foot space includes a kitchen and dining area, showers, toilets and the main lounge and locker area for the players. We didn’t see the Mariners’ 15,000 square foot clubhouse, which I am sure is quite the space.

The final stop on our tour was the dugout. It was so exciting for our little group as we walked along the same tunnel that all our favourite players pass through on their way to the field. One guy started to do his own play-by-play, imagining it was game 7 of the World Series, and he was the star player, about to enter the stadium to cheering fans.

There’s something magical about walking into the 47,000 seat stadium via the dugout. You can almost taste the game that is played in this sacred place. Matthew and I together imagined the exact spot where the manager sits and the chatter among the players along the bench. We loved it. 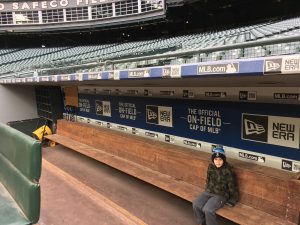 Matthew and I have visited three ballparks together so far – Rogers Centre in Toronto, Wrigley Field in Chicago and now Safeco Field in Seattle. I look forward to more games and more tours. I will help make sure my son’s childhood dream comes true.