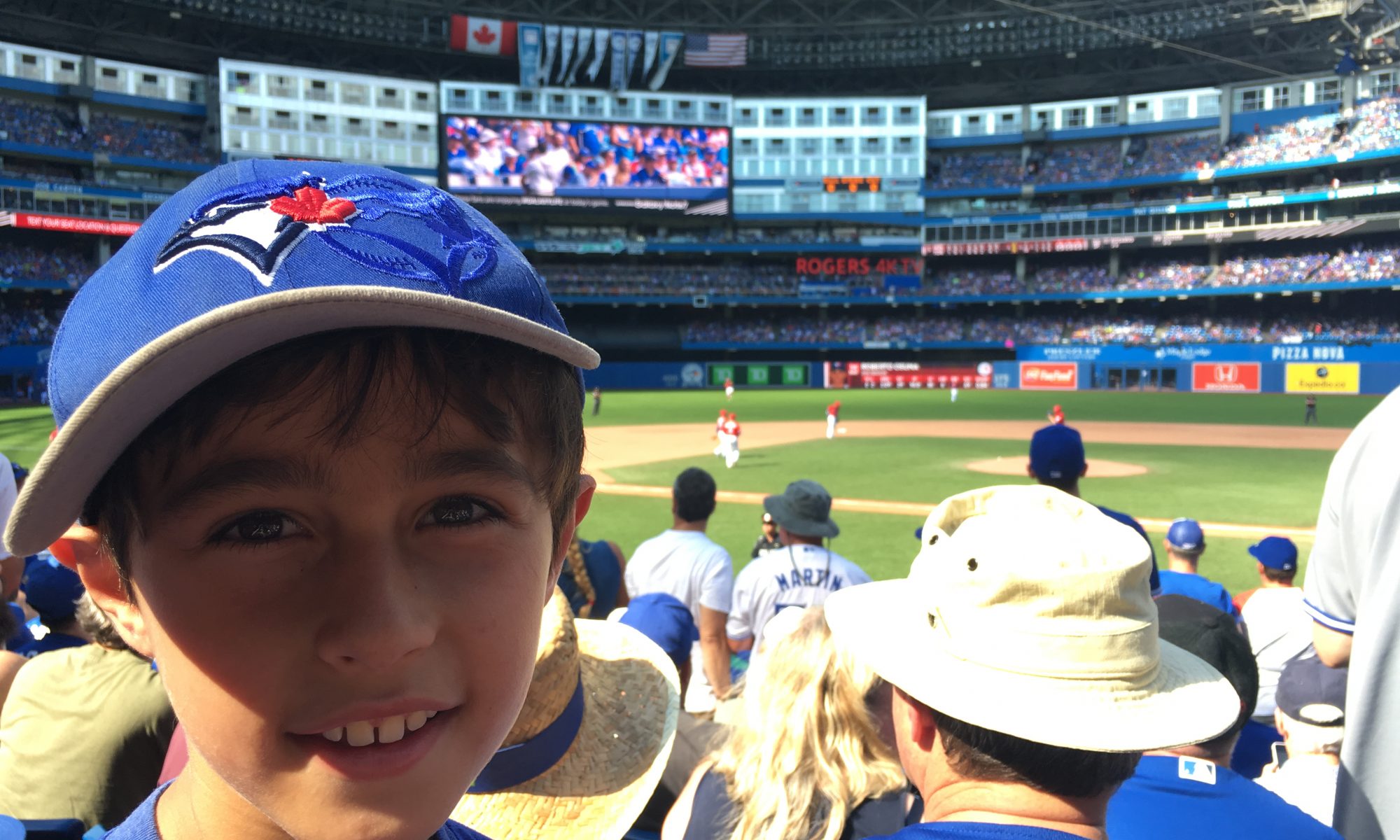 My son is a huge sports fan. I’m talking about living, breathing, touching, feeling and every other sense and emotion out there. Matthew starts his day checking the scores from the previous evening, spends much of his free time shooting hoops or throwing a baseball in our backyard and likes to watch his favourite teams play well into the night, every night.

I guess you can say that my dream came true. I have loved playing, following and watching sports since I was a child. I grew up on a quiet street and played ball hockey and baseball with the boys, I collected and traded baseball cards and I religiously listened to Tom and Jerry on CJCL AM 1430 radio (today the Jays can be heard on Sportsnet the Fan 590) as I did my homework every night.

I had my aha moment in grade 11 chemistry (yes the same class though not the same day that I created Kinetic Man) when I suddenly realized that I wasn’t bright or ambitious enough to go to medical school but instead wanted to be a journalist. Oh and not just a journalist but a sports journalist. Everyone, and I mean everyone, laughed at me.

It took me a few years to get back on track, but I took the first step in graduate school when I interned at ABC Sports Radio, in my final semester of journalism school at New York University. With a small production staff I had a quick learning curve, and it all culminated in the fall of 2000 when New York City hosted the famous Subway World Series – Yankees vs Mets. ABC handed me the ball one night and I handled the reporting duties, on the field at Shea stadium!

When I returned to Toronto the following year some great people took a chance on me and hired me to be a producer at the short-lived Team Sports Radio Network. Then I got an opportunity to join the Assignment Desk at Rogers Sportsnet, working with some of the greatest names in sports media. Many of those talented journalists are still at Sportsnet today or have moved on to other careers in sports media in Canada, and I want to thank all of them for teaching me so much about sports and sportsmanlike conduct.

So it thrills me that my son loves sports. Matthew loves baseball and basketball most and can’t bear to miss a game. Hockey is close behind. He lives for the Blue Jays, Raptors and Leafs (I’m a fan of the Carolina Hurricanes but that story is for another day) and he will support really any team if it’s home base is in Canada. Sometimes he takes the term “fan” to the level of “fanatic,” like when he insists that he watch the last quarter of the Raptor game in the car on my phone or he must watch the Jays game in full at 10:00 pm when they are on the west coast.

Matthew loves sports so much that if none of his preferred sports are on TV he will choose almost anything, just to get his sports fix in. Maybe some of you love it, but I can’t bear to watch darts, poker or bowling. I draw the line at entertainment that involves throwing sharp objects at a board with people cheering them on.

My husband doesn’t care much for sports, so it brings me a smile every day that I found my sports partner in life in my son. Matthew loves my encyclopedic knowledge of baseball and its many rules, and we literally can sit together for hours discussing the many nuances of the game.

Matthew asked for one thing for his birthday this year – a trip with me, his mother, to Chicago this summer, to watch his beloved Blue Jays play the Cubs. Our flight has been booked, the hotel is reserved and we have a pair of tickets to the Jays at Cubs game on Friday afternoon, August 18. As a bonus, Toronto’s MLS soccer club is in Chicago that same weekend and we have scored a pair of tickets to the Toronto FC at Chicago Fire game on Saturday night, August 19. Now that’s a perfect mother and son weekend.

One Reply to “Sportsmanlike Conduct”