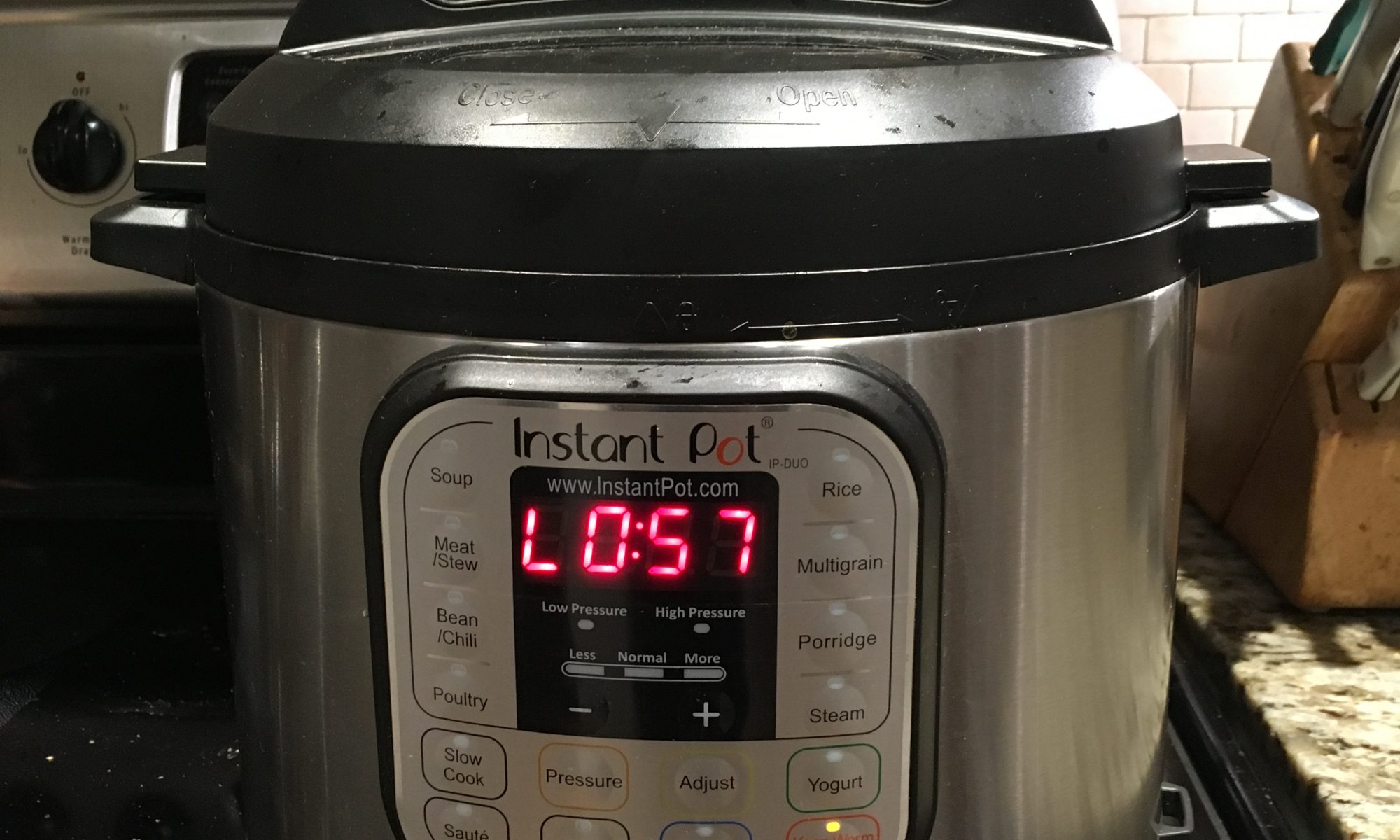 My mother and sister are always on the hunt for the latest kitchen toys. Ice cream maker, spiralizer, sous vide, bread maker. The list goes on and on. These are all good toys and they have their use in the kitchen. For the most part I also believe my mother and sister use them. They both are great cooks and often feed big crowds. I do enjoy the odd toy in my kitchen (I can’t live without my espresso maker!), but I was a skeptic when my sister first told me about the Instant Pot.

When she bought this contraption, she talked about a pressure cooker that was easy and safe and that could cook up delicious food in minutes. I did not believe her. How could you dump ingredients into a machine, press on and minutes later have fully cooked food that was also tasty? No way. Not possible and I wasn’t interested.

If you know my sister you know that she is a rather determined person. She did not give up on me. Every time the Instant Pot went on sale on Amazon I got a friendly text or email. It was unrelenting. She told me this machine was life-changing, that it would become the centrepiece of my kitchen. No way I said, I had enough kitchen toys.

Then on Black Friday last year the Instant Pot was on sale for a price that was almost too good to be true, so I relented and purchased it. A few days later it arrived at my house, I opened the box and gave it a once-over.

I surfed the web in the days before my Instant Pot arrived to find a few recipes to try on this new toy and was ready with a fridge stocked with ingredients. In my first week, I decided to experiment with a Mongolian beef dish, General Tsao chicken and a couple of soups.

Oh my gosh my sister was right. Yes, I will very publicly admit it here – my sister was right. The Instant Pot was easy to use and every dish was sensational. The beef was full of flavour and melted in the mouth. The chicken had just enough kick and was tender and juicy. Every soup had a deep flavour after only 10, 20 or 30 minutes in the pot.

My Instant Pot is definitely now one of my best friends in the kitchen. I have tried dozens of recipes since it joined the family back in December. Soup is my favourite thing to make, but I have also made roast chicken, chicken wings, pasta dishes, rices and last night made the best ratatouille I have ever tasted.

My daughter has had a bit of thing for ratatouille since she saw the famous movie by the same name and has been begging me to make it. So, last night I thinly sliced up 2 baby eggplants, 2 zucchinis, I chopped 3 peppers, one onion and four garlic cloves.

I turned on my Instant Pot to sauté (yes you can first sauté in the pot before you switch to high pressure), heated up some olive oil, then threw in the garlic and onions to create a strong flavour base. Then came the peppers, followed by the eggplant and zucchini. Then in went a 28 oz. can of crushed tomatoes and some pepper and salt. I carefully mixed it all together, closed the lid and set the machine to manual high pressure for 5 minutes.

The Instant Pot did its thing. It rose to high pressure, cooked the food for 5 minutes, then I let the pressure naturally release for a few more minutes. In the meantime, I cooked a pot of quinoa (which one can also make in the Instant Pot if you wish) and in less than 30 minutes (includes time to chop veggies and cook the food) I had a fabulous dinner.

After 7 months, I am still a novice with the Instant Pot. I have not ventured out into foods such as yoghurt or cheesecake (though I did make perfect molten chocolate cakes in there). I hope to go there soon. This toy is a good investment, whether you are a gourmet cook or scared of the kitchen.

I am always looking for new recipes and new foods to try in my Instant Pot. Leave me a comment here, post on Facebook or Tweet me @AliciaRichler with some ideas that I can try. I will let you know how it goes.