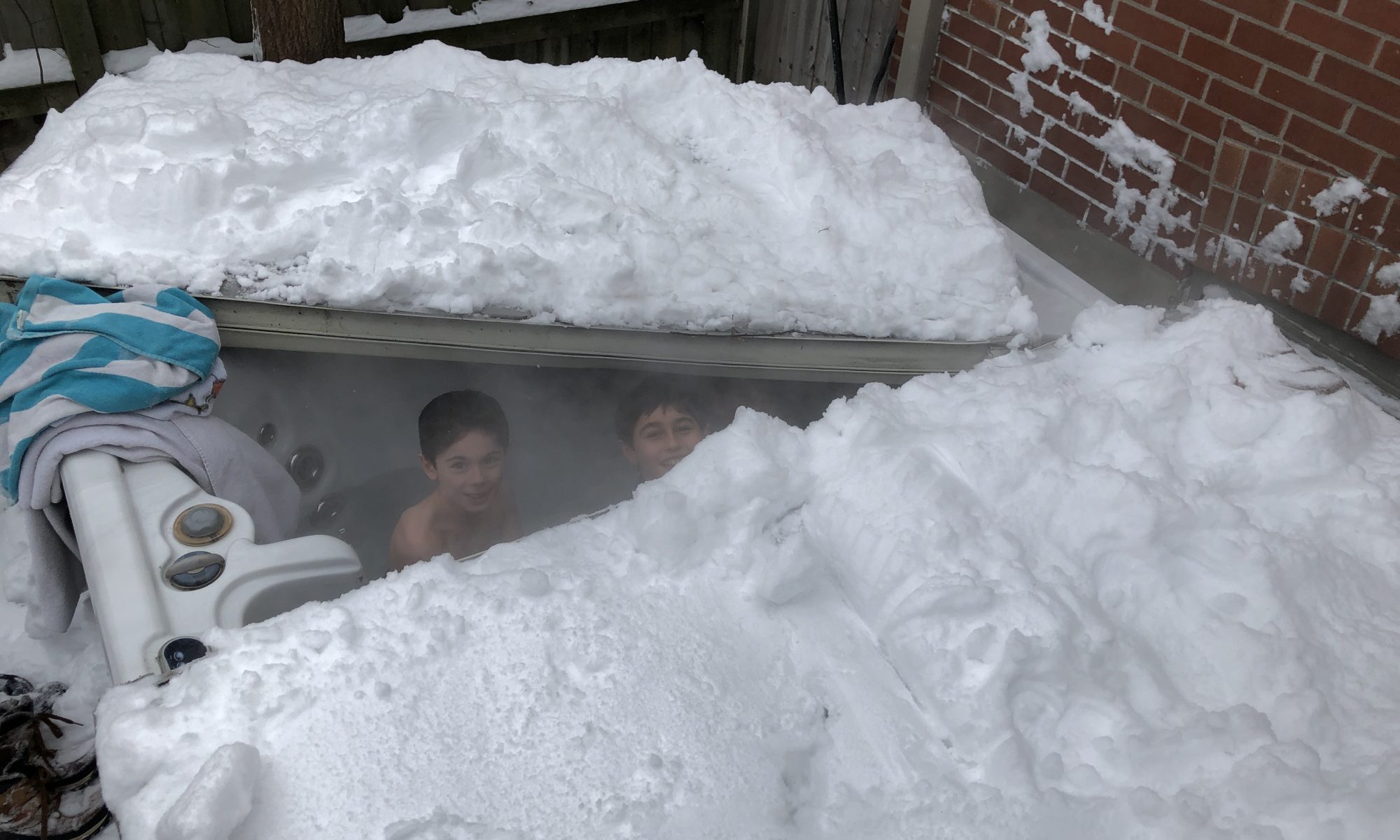 Some people would describe a massive snowstorm as terrible and nasty. They shudder at the prospect of cleaning heavy snow off their car, a longer commute to work and slippery sidewalks. It’s just miserable. Then there are people like me who perk up and get excited when they hear the word snow. When I saw the weather forecast a few days ago that a big storm was headed my way, my first thought: snow day.

A rather big snow storm blew through Toronto on Monday. For those of you who live in cities who get big storms all the time, sure laugh at us. But I’m sure that a solid 35 cm of the white stuff fell on my front lawn. And all over Toronto. The city was crazy and hectic. But as I sat at home and looked out my window, I saw the beauty of my neighbourhood covered in a shiny white blanket.

Tuesday morning, 6:40 am. My cell phone rings. I ignore it. Ten minutes later the phone rings again. I turn off the ringer.

My morning radio alarm goes on and they are reading out the list of school closures. I check my phone. Email from the kids’ school. It’s closed. Phone rings again and I finally answer it. The preschool is closed.

I firmly believe that a snow day is one of the greatest highlights of childhood. Every child has to experience at least one snow day. You wake up groggy from the night and your parents tell you, guess what, school is closed – snow day! The look of joy on my children’s faces was something I will remember for a long time. Pure happiness.

Stay in your pyjamas. Make a big batch of French toast. Turn on the TV and watch morning cartoons (update for 2019: pull out the ipad and click on the Netflix app). Sit back and relax.

I looked out my front window and quickly came to the conclusion that I wasn’t going anywhere either. Getting dressed meant throwing on a pair of old sweatpants and breakfast was a homemade espresso and leftover french toast.

I flicked on my laptop and did my best to hide in my home office to work. By midday I had actually accomplished quite a bit of work. There were six children in my house, including the kids’ friends and my nephew. We were settling in for a cozy day.

I don’t know what the three boys did outside, but after a couple of hours in front of an ipad or XBOX, these border collies needed their run. Again, thank you tons of snow for providing great entertainment for them. My two-year-old wasn’t quite as happy. She couldn’t move outside in the waist-deep snow (ya that happens when you are a few inches under three feet tall).

As the afternoon wore on, the brood of children grew restless, in particular the boys. So isn’t it logical to throw on a bathing suit and jump in the hot tub? If you are 10 or 11 years old, sure! Minus ten (or something close to that) and a foot of snow is a great appetizer to a 95-degree vat of water.

Everywhere I looked in my house all day a different activity was going on. My older daughter was hosting a Playmobil pool party in her bedroom. My son took full advantage of his selection of XBOX games in the basement. The baby traveled from room to room, sharing her toys and snacks with the couch, the floor, her clothes and her siblings’ bedrooms. David and I switched off between work and cleaning up after the pack of kids.

On first read it sounds like the local zoo, but it was bliss. Outside it was freezing cold with layers of snow blanketing every corner of the city. And inside everyone was cheerful and drinking in every moment of this special day.

And as the sun began to set on the day, the fun continued. My nephew and son announced their interest to go night snowboarding at a local small but decent little hill – right in the middle of the city. My daughter definitely had a bit of cabin fever and eagerly went to her karate class.

We didn’t waste a minute of the day. Good food, good friends and good fun. Who could ask for more? Maybe another snow day tomorrow? My kids were quite sure of that as they drifted off to sleep. It was a great snow day, indeed, but another one tomorrow? Ah, I don’t think so.

One Reply to “Do you want to have a Snow Day?”