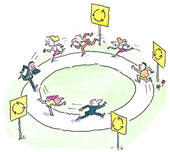 If you know me, or if you follow my blog, you know that I’m a sports fan. It’s a topic I love to write about, from baseball to hockey to football and basketball. Skiing. Tennis. And of course, the Olympics. Yes I admit it. I love the Olympics. I love to watch the Olympics, whether it’s the winter or summer games. I can’t get enough of it. For the past week and a half I have closely followed the Tokyo 2020 Olympic Games, but what has piqued my interest the most are the Canadian women.

I am a person who defines myself in many ways. When I ask myself who I am, I never have a simple answer. Of course I am a mother and a wife. I’m a daughter, daughter-in-law, sister, cousin, friend. I am a writer and communications leader. But I’m also a woman. I’m a woman with a voice, often a loud voice.

My career has been shaped, in part, by choices that I made as a woman. I turned down a promotion, and raise, when my son turned one, so that I could work part-time and be with him. I was laid off from a job during a supposed reorganization weeks after I returned from a year-long maternity leave with my older daughter. I lost another job while I was on maternity leave with my third child!

I learned years ago that I couldn’t do it all. Kudos to the women who find a way to do it all, but for most of us, we need to make choices. If I wanted to be with my children when they were babies, it meant my career slowed down, or at times, paused. If I want to push myself all the way now at work, it means time away from my kids. So many women feel this pull, as they push forward with a career and raise a family.

So, back to where I began and my love of the Olympics. I’m not going to make excuses for that. There are many reasons why the Olympics may be past their prime and need to be rethought for our 21st century society. The cost to plan and execute the games is absurd. Venues are built that often fall into a state of decay a few years later. The lives of the locals are put on hold when the world arrives in their town. Quite frankly, the Olympic games are rather unpopular.

The Olympics has never been less popular than the 2020 games (yes, happening in 2021). Even I, a long-time fan, had my doubts. But, I woke up at 6:30 am back on July 23rd, to watch the opening ceremonies on TV. As soon as the countdown began to the live event, at 7:00 am my time, I was hooked. I watched the athletes march out, each with a woman and man holding their country’s flag, together. I heard the commentators state that Team Canada has about an equal number of men and women this time. There was a feeling in the air that it was an Olympics that wouldn’t just be defined by a global pandemic but also the strength, determination and power of great women.

Before even one game was played or one race run, women made headlines around the world. Canadian boxer Mandy Bujold won an appeal to compete, since she chose to have a baby during the qualifying period. But it wasn’t only Bujold who got a chance to compete. She changed the rules so that in the future, women who are pregnant or postpartum during qualifying will have a chance to compete.

Then there’s Kim Gaucher and her baby, Sophie. She appealed – and won her case – to bring her infant with her to the Olympics so that she could nurse her daughter.  And don’t forget the Norwegian women’s beach handball team who were fined for not wearing bikinis at a European Federation event. It went viral on social media and was not actually connected to the Olympics, but it brought up the role of uniforms for women in sport.

And once the games began, Canadian women are lighting it up. As I write this blog, Team Canada has won 3 gold, 4 silver and 7 bronze medals. How many have been won by women? Thirteen. Do the math. 3 + 4 + 6 = 13. With the exception of the great Andre de Grasse who won a bronze medal in the 100 metre sprint), all the medals have been won by women. I do not want to discount the hard work and incredible effort and achievements by our Canadian men. Just being at the Olympics is an achievement. A top 10 finish is amazing. And how about a fourth place finish? Two one-hundredths of a second in a race can separate an athlete from a medal and fourth place.

But let’s go back to the incredible achievement of our Canadian women. Like me, every one of Canada’s female athletes has a story and define themselves in many ways. Some are wives or mothers. They may be students or professionals. And they are all Olympic athletes. It would be hard to find another sporting event around the world where women are adored and celebrated like they are at the Olympic games.

I watched as the Canadian team rowed and raced in the Women’s-Eight event. I was in awe as they pushed themselves to the brink of exhaustion and stayed ahead of the competition from the moment their ores hit the water. This amazing group won gold. They come from diverse backgrounds and came together as one strong team to achieve greatness – while the world watched.

Canadian women are making their mark in the pool, as they swim and dive. Weight lifting. Softball. Judo. And of course rowing. But they are really making their mark on Canadian women – and girls. We are reading about them on the internet. We are watching them achieve greatness on TV. And we are talking about them at home. The story in Canada right now is just how great our female athletes are. These Olympic games are pushing women into the headlines, as we celebrate them every day.

On the weekend the Summer Olympic Games will come to an end. Many of the women who became household names this week will return home, some to train at school, or back to work or hug their kids. It is my hope that we keep the momentum going, to encourage our daughters to be their version of an Olympian. Maybe our girls will be baseball stars, or concert pianists or become a doctor or teacher or write an award-winning novel.