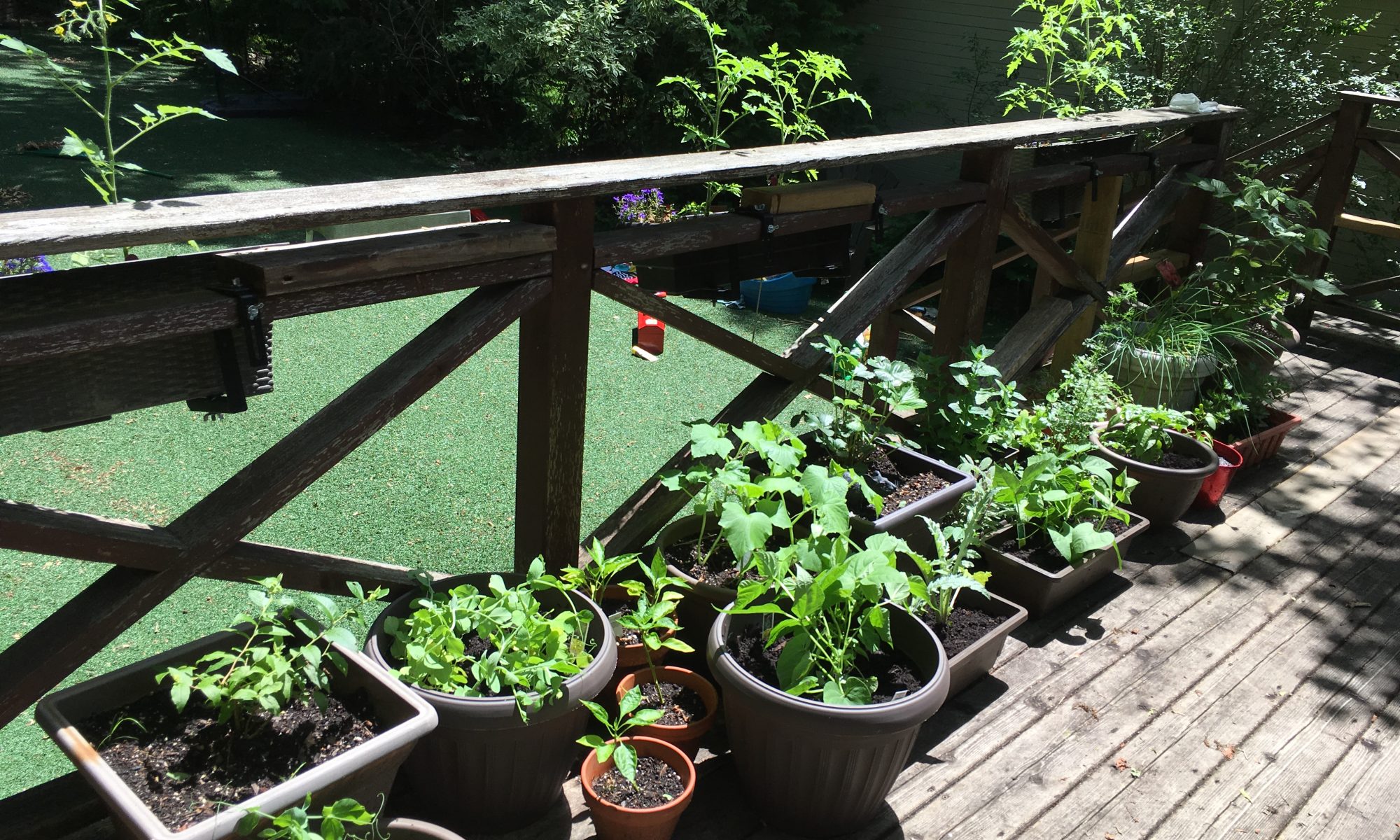 In a previous post, I stated that I don’t exactly have a green thumb. I am not a natural when it comes to the garden or plants. I admit that I kind of forget to water my indoor plants. But I love the idea of an outdoor garden. I love to walk through my neighbourhood and admire colourful and neat and tidy gardens that have grown to maturity because of a lot of love and care.

In our first home, I was determined to create a small garden of my own. I wanted a mix of gentle greenery, hits of colourful flowers, some herbs to give a nice aroma and even a few vegetables in pots. The garden grew and flourished. The vegetables either wilted and died or were pulled and eaten by the many animals that lived in the neighbourhood. Our old neighbourhood was frequented by many squirrels, racoons and even skunks, and they were in charge of the garbage and gardens with food. I had little success even growing a simple healthy tomato.

When we moved to our current home a few years ago I decided to try again. I thought, maybe the local raccoon and squirrel militia was kept in check a bit better in this area, where most of the garbage cans were kept in garages and sheds. The garden got a late start as we only moved in June and planted a limited vegetable garden. I also planted my vegetables on my deck, right beside my house.

The tomatoes came in late, around late August, but they grew! We had a limited tasty crop, and their bright red colour made my garden shine. Did we have a weaker animal population? Did the proximity to the house, on my deck, make a difference? Maybe.

I dabbled in vegetable seedlings in 2015 and 2016 and failed miserably. They all sprouted quickly and easily and grew. I kept them in a warm and sunny spot in my house all spring and lovingly cared for them. I transferred them outside as the weather warmed, and boom, they either flopped and died or the local animal militia gobbled them up.

But, I also bought a number of small plants from my favourite Collingwood Farmers’ Market and a bunch more from an organic market north of Toronto called Awesome Blossom. Success! Okay, not big success, but my plants flowered in early summer, and we had a small crop of tomatoes, green beans, peppers, zucchini, kale and lettuce. My vegetables were tiny but cute and I decided that I would push forward in 2017 and build a fresh vegetable garden.

I’m at it again this year, and while it’s early, so far things are going well. My giant deck planter had a small incident over the winter (okay, it broke and crashed to the ground), so now each vegetable has its own planter. I think that actually may help so I don’t have any crowding or competition for soil and water. I did experiment with a bit of corn, which was grabbed by the animal militia, but my cucumbers, tomatoes, peas, beans, peppers and a few other goodies are thriving so far. My husband’s experiment with a strawberry, blueberry and raspberry plant have been a bit of a failure. They are growing and are green, but so far all we have seen are two tiny strawberries. We are not ready to grow fruit yet!

I am excited to watch my vegetable garden grow and bloom. I will provide updates here as it develops over the summer and we harvest the goodness.