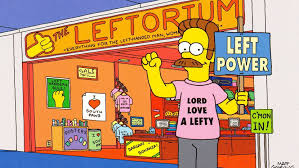 My high school had an annual speech writing – and presenting competition. It was not optional. Each year each student had to choose a topic (any topic), write a speech, then perform it in front of his or her English class. The top two speeches in each class (as chosen by fellow students) performed said speeches in front of the whole school. The best speech I have ever written, and presented, was in front of my grade 10 English class. The topic: why life is best when you are left handed.

Yes, I am left handed and proud of that distinction. I come from a long line of left handed people and have always been surrounded by them. My grade eleven biology teacher even called my family a genetics miracle when she learned my parents are both right handed while my brother, sister and I are all left handed. I have a grandmother who was left handed (though was forced to write with her right hand), so is my uncle, so was my great-grandfather and piles of cousins. My husband, David, is even left handed. Somehow, we managed to produce at least two right handed children (Nessa’s fate is as yet unknown as she prefers to eat a crayon and toss a fork across the room and not actually show me which hand she prefers).

So back to that grade ten speech about why life is best when you are left handed. I did quite a bit of research for this speech, and I mean real research, as this was the spring of 1992, before kids went to Google to do their homework. I interviewed people and read books and even checked out a store in downtown Toronto that specialized in products for left handed people. One of my most cherished possessions to this day are my left-handed scissors. Try to use these babies to cut a piece of paper with your right hand – you are out of luck.

I remember that I learned that left handed people tend to be more creative, often more musical (though I dispute that with some lefties I know) and are usually more outside the box thinkers. I also recall that there is hard evidence that left handed people are better at reading backwards, and upside down. Now that’s a useful skill.

And here is a cool fact about the significant number of left handed U.S. Presidents. I found this paragraph here:

Do you know which are the seven?

I remember some other key facts about the better hand. For example, if you are reading this on your computer (or even on your phone just click on your keyboard), what letters do you type most? S? R? T? E? A? The letters on the left side of the keyboard are more commonly typed than the right. For those of us who live in a metric country (like Canada), go check out your measuring cup. Do you need to measure 125 ml of liquid or 250 ml? Made for a lefty. And clearly the British were on the right path with what is known internationally as “left hand drive.” The gear shift, and the cup holders, are accessed with the left hand.

Okay, so all of you righties reading this (which is most of you seeing that 90% of the world’s population is right handed) are thinking…. Hmmm… that’s a lot of useless crap she is talking about. You are correct. The fact is, life can often be challenging as a lefty. I wouldn’t go as far as to say that we are discriminated against, but I feel that I am living in a right handed world that is often insensitive to my left handed needs.

I remember once walking into an exam in university and discovered only right handed desks. There was no way I was going to sit for three hours bent over sideways to write my exam. I demanded a left handed desk or basic table and got what I wanted. I need to use my right hand with a standard can opener. My hand is always covered in smudged ink when I write as English just had to be written left to right (I much prefer Hebrew, which is written the other way – clearly Hebrew was developed by a bunch of lefties). It took me years to figure out how to play tennis, and it was only in university when my intelligent tennis instructor showed me how to properly grip, serve and hit the ball with my left hand.

I still play hockey right handed, because I was told, “that’s how you hold a stick,” when I was a child. I do own a left handed baseball glove, and my son is proud that his Mom is a switch hitter (again, I was told how to bat, but I defied them all and hit from both sides!).

Check out the definition of the word “sinister” at Dictionary.com. It gives a list of explanations, including “threatening or portending evil, harm or trouble; ominous; bad; evil; wicked; unfortunate; disastrous; unfavourable; of or on the left side; left…” Sinister, or sinistra, is the Latin word for left handed. Really? Am I evil or is it unfortunate to know me? I think not.

You may be wondering, if her grade 10 speech was so good, did she win? Was she chosen by her classmates to present this brilliant speech in front of the whole school? The answer – no. Why? They told me they simply could not select a lefty, or at least a lefty who boasts about why life is best as a left handed person. I’m still bitter.