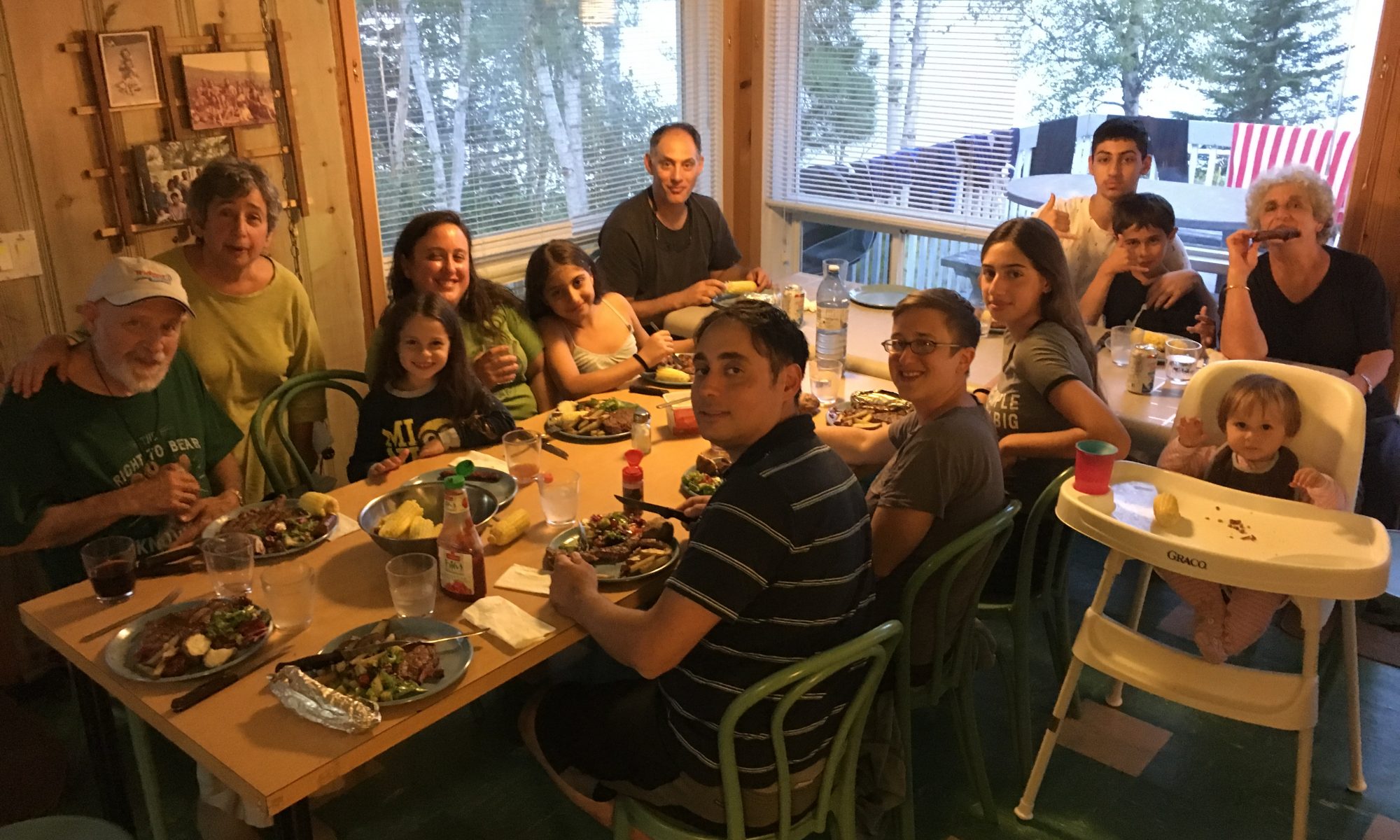 I have been teasing this blog post for the last few weeks. I have mentioned the house in Saint Donat a few times in previous posts, and now is the day I will share the great wonders of this special place. I’m talking about the Hart family country home, deep in the Laurentian mountains, in the heart of Quebec.

The Hart family is David’s mother’s family. David’s grandfather, Isador Hart, bought land in the far-off village of Saint Donat in the 1940’s. In 1949 he and his wife, Ada, built a small cabin on the edge of Lake Archambault. They chose a spot where the land juts out and has the most spectacular view of the lake. From this spot, it feels like the mountains are melting into the water below.

The two-bedroom cabin was a tight squeeze for the Hart family of five, which included their three kids, Barbara, Annie and Billy. Over the years, as the family grew, the house was expanded and renovated. Today it is a five-bedroom, three-bathroom sprawling bungalow. The house maintains its 1950’s character, with the original yet functional kitchen, painted wood paneling and assortment of vintage furniture.

The Hart family’s connection to this home is something special. As my mother-in-law, Barbara, recently said, “If I forget thee, O Saint Donat, may my right hand wither.”

David grew up in this home, as did his siblings and cousins. They spent their summers here, swimming in the lake, playing hide and seek and building sand castles on the beach. David often tells me that his best memories of his childhood are from Saint Donat.

I have been coming to Saint Donat for half my life. I have been here when it’s almost empty and quiet and also with twenty other people. When the house is empty, you can hear the loons sing on the lake and the trees rustle in the wind. When the house is full, like it is this week, it can be hard to find a seat on the couch or two minutes in the bathroom. I remember one summer, a few years ago, when the house topped twenty people and we ran out of beds and couches for people to sleep. The living room was so packed with people, on couches, the floor and a cot, that it looked like a homeless shelter.

The traditions are many in the Hart house, and there are too many to include all of them here. People don’t swim here, they throw themselves in the lake. It wouldn’t be a summer without “Steak night in Canada.” A popular evening activity is a rousing game of Boggle. A morning is not complete without a roaring fire. Grandma Hart’s famous eggplant, first made by Ada and now by Billy, is a staple. There are power walks, canoe trips and camping trips. Squad Leader. The deer head. Decorated plates. Ancestor photo. Good things breakfast. Blueberry pie. People magazine.

I often joke that the home has kept so much of its original charm that if you pushed one of the outside walls too hard the whole house would fall over. Okay, it’s a bit of an exaggeration, but like any home that is almost 70 years old, the property probably needs a bit of TLC. Maintaining a family country home for so many years can be a challenge, and planning for each summer is often an anxious experience. But for me and David, once we hit the Laurentian Autoroute and pass our favourite landmarks like the Big Chicken, Banana Bridge and cross on the mountain, our stresses disappear.

For the Hart family, no matter how busy life is, no matter where in the world they live, Saint Donat is their true home. They would move mountains to spend time here and come together as a family. As a thunderstorm brews outside and we gather in the living room beside a roaring fire, today the Hart family is enjoying a typical Saint Donat day. I look forward to so many more.