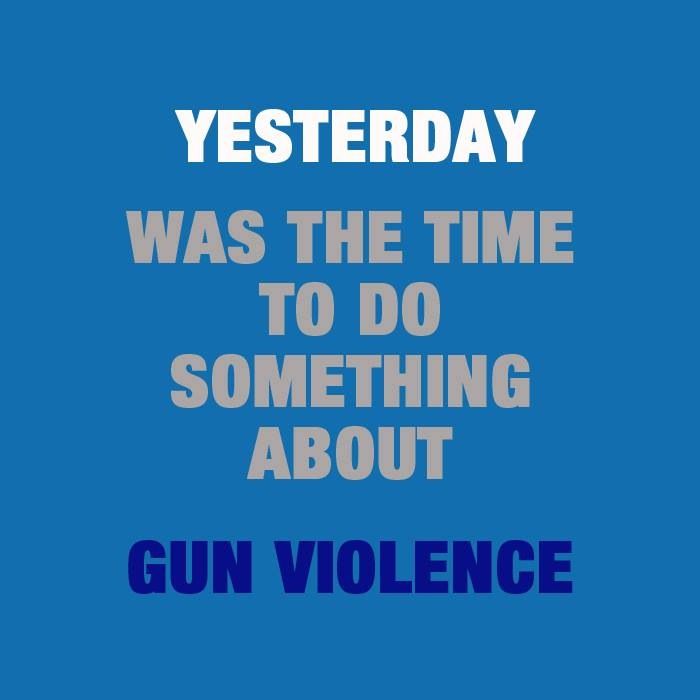 I went to bed late Sunday night and had trouble falling asleep. I was restless and could not get comfortable. I remember that I looked at the clock beside my bed at 12:45 am, then I must have fallen asleep a few minutes later. Little did I know, as I fell into a deep slumber, in the comfort of my bed, that horror was about to strike down people a few thousand kilometres from my home. It was yet another, more fearsome and deadly than ever, episode of gun violence in the United States.

My sentiments in support of gun control go back to the fall of 2000, during my third and final semester of Journalism School at NYU. For one of my final courses to achieve my Master’s degree, I had to develop, write, produce and edit two short documentaries. The first had to be on a U.S. election issue (do you remember the famous election of 2000?) and the other was on a subject of my own choice.

I was immediately drawn to the issue of gun control for my election piece, and I spent a lot of time and energy researching the subject. As a Canadian, I knew about the strict gun laws that existed at home, but I knew little about the issue in the U.S.

As a journalist, I knew it was my job to seek out all perspectives, to speak with people on both sides of this emotionally charged issue. And I did that. I did my due diligence, and I made sure to interview gun-carrying advocates as well as those in support of strict gun controls.

But it was hard for me to keep my composure when I sat across from a mother who tearfully told me about her son’s last days, before he was shot in the head and killed by a gun. I stayed professional as I recorded the interview and gave her the opportunity to tell me her story.

I produced a fair and well-balanced story, so that anyone who viewed my 8-minute piece was educated on the issue and could make his or her own decision. But I knew where I stood then and I know where I stand now. I believe that not only is there almost no gun control in the United States but that the gun policies that exist in that country are killing its people one by one.

I am not an expert on American gun laws, but if one man can own almost a dozen guns, including a machine gun which can blow off round after round of bullets, there is something wrong with that society.

After each tragedy, where massive casualties due to gun violence have been suffered, we see government and community leaders stand up in front of the world and declare that they can’t take it anymore. They say they can’t bear to watch innocent children murdered or young couples out for an evening concert shot down. But at the end of the day the society as a whole just moves on and waits for the next tragedy.

Can we blame today’s gun violence epidemic on the U.S. Second Amendment? It states, “A well regulated Militia, being necessary to the security of a free State, the right of the people to keep and bear Arms, shall not be infringed.” This amendment was enacted in 1791 as part of the Bill of Rights, and from what I have read, this pertains to individuals. I understand why it was written, back in 1791, based on the current situation in which this young country was living.

But a right to bear arms does not mean that everyone should bear arms. Or if someone feels strongly about this right, how can this person legally acquire a pile of handguns and an assault rifle?

Guns have one purpose: to kill. A gun is not a toy and it’s definitely not art. It is a weapon designed to kill a living being, and that’s it. So, if someone insists on buying one gun, never mind ten guns, society needs checks and balances in place to keep control over those guns and those people with those guns.

Sunday’s act of savage gun violence may have killed more people than any one attack before, but it’s just one of many that have happened this year, in years past, and I am sorry to say, for years to come. Until the people of the United States look inward and understand that guns are killing them from within, they will not change.

My sincere sympathy and condolences to the families and friends of the victims of this week’s gun violence and to those who were killed from violence from guns in the past.